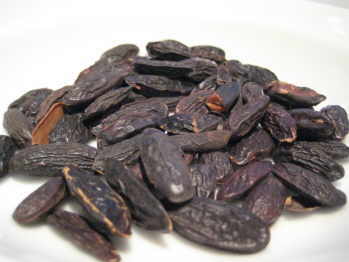 Tonquin Beans, also known as Tonka Beans, Cumaru or Kumaru is a species within the pea family which flowers profusely and is native to Central America and the northern half of South America. It is the seeds of the tree that are known as tonka beans (sometimes tonkin beans or, more properly as, tonquin beans). They are black and very wrinkled and have a smooth, brown interior. They have a very strong fragrance similar to Sweet Woodruff (Galium odoratum) due to the very high content of coumarin they contain

The word “tonka” is taken from the Carib tongue spoken by natives of French Guianaand  it also appears in Tupi, another language of the same region, as the name of the tree. The old genus name, Coumarouna, was formed from another Tupi name for tree, kumarú.

It has a peculiarly agreeable smell, and is employed in the scenting of snuff and the perfumery industry where it is often employed as a fixative.

It is an aromatic and some consider it a slight narcotic.

Tonquin beans have been used as a substitute for vanilla and as a perfume ingredient but also in tobacco products before being banned in some countries. They are used in some French cuisine (particularly, in desserts and stews, adding a very strong spicy vanilla flavour – if experimenting – use sparingly) and in many well known perfumes.

Their use in the food industry is regulated in the United States of America by the FDA where they are deemed to be illegal to buy despite the fact that the USA is the world’s largest importer of the beans. Vast amounts of them are smuggled in to the USA each year (usually via Canada). They are not illegal anywhere else in the world. If you are based in the USA, you have the right to purchase this item however it is at your own risk and the possibility exists that your purchase will be confiscated by US Customs. We can accept no responsibility for such an occurrance.

Many anticoagulant prescription drugs, such as the well known warfarin  are based on a chemical derivative of coumarin initially isolated from this bean. Coumarin, however, does not have anticoagulant properties itself.

Tonquin is still used today to flavour some pipe tobaccos