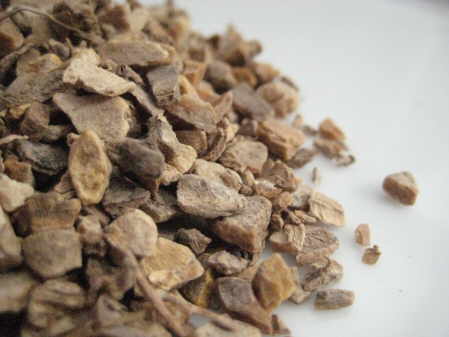 It is also known as White Turmeric or Kentjur

Zedoary Root (Curcuma zedoaria Roscoe) is a popular spice and medicine in the Eastern world, used similarly to its cousin turmeric in condiments and curries.

It is a rhizome ( like its cousin Turmeric) a like wet forest regions in the tropics. It is a fragrant plant and has brigh yellow flowers with red and green bractss and the underground stem section is large and tuberous with many branches. the eaves can reach 3 feet in length.

It is also known as White Turmeric or Kentjur

The white root or rhizome is edible and has a fruity smell a bit like mango or perhaps guava but its taste is bitter and similar to ginger and leaves an aftertaste.

In Thailand it is shredded and used with other vegetables and the fresh rhizome is used in pckles in India whilst the dried product, powdered or cut, is used in curry pastes.

Zedoary is a component of the gastrointestinal remedy, Swedish Bitters. It has the odour of camphor and the taste of slightly bitter ginger. When chewed, the roots turn the saliva a dull yellow, similar to turmeric.

Traditionally, Zedoary is used for treating flatulent colic and indigestion, though not as popular as ginger for the same purpose. The bitter tincture of Zedoary root is used to prevent the re-appearance of malaria and similar diseases and to treat ulcers. Through its bitter properties, Zedoary increases the flow of gastric juices relieving dyspepsia and gastrointestinal upsets associated with digestive organ congestion.