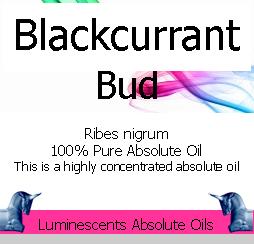 CONSISTENCY: Can be thick and Viscous and might require gentle warming to liquify

blackcurrant bud absolute oilRibes Nigrum from which Blackcurrant Bud Absolute Oil is obtained is extracted from the buds of the plant in late winter/early spring which are then at their most fragrant.

It is not the same as Blackcurrant Seed oil which is a cold pressed vegetable oil used as a carrier oil or in cosmetic preparations along with vitamin E as a preservative as it has a habit of going rancid quite quickly. The bud absolute is a much rarer product made from only the burgeoning buds of the fruit.

Blackcurrant is a native to temperate parts of Central and Northern Europe and Northern Asia where it prefers a damp fertile soil and is widely cultivated both commercially and domestically. It is winter hardy but cold weather at flowering time during the spring reduces the size of the crop of berries. It grows wild in many parts of Europe, particularly France.