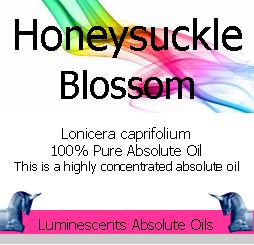 SCENT: Honeysuckle has a very complex floral base and is intensely sweet, floral but not at all like the flower itself

COLOUR: Can vary between pale yellow to orange or pale green

CONSISTENCY: Can vary between medium to viscous

Lonicera caprifolium from which Honeysuckle Blossom Absolute is extracted is also sometimes, and some would argue, better known as Absolu de Chevre-feuille (Absolute of Goats Leaf). This is, apparently, due to the fact that goats love to chew honeysuckle leaves. It is a very rare oil. Production methods are often erratic.

Many oils labeled as Honeysuckle are adulterated or synthetically produced. Some of these originate in China and, in our opinion, should be avoided.

This oil is from France where production has started again in small quantities. It has been absent in the market since the mid 1930’s.  Small artisan makers in both France and Italy have continued the tradition in the interim, manufacturing small quantities. This is for high end hand made perfume manufacture. It has not generally been available to the public during this time in itsasbsolute form. The synthetic oil, produced throughout the 50’s and into today, has dominated the market with the rise of mass produced “designer” fragrances.

It has no known and confirmed aromatherapy benefits or attributes other than its much sought after aroma and is most often used in high end, hand made perfume manufacture.