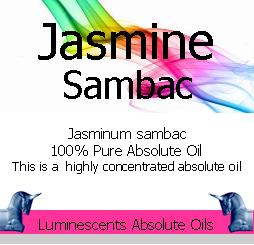 SCENT: Jasmine Sambac is an incredibly intense aroma that is very floral, yet more musky and masculine than the Jasmine Grandiflorum.

Jasmine Sambac is a beautiful plant; its flowers bloom late in the evening unlike Jasmine Grandiflorum that blooms in the early dawn. It is a native to a small region in the eastern Himalayas in Bhutan, India and Northern Pakistan but is cultivated all over the world. Strangely it is sometimes known in the UK as Arabian Jasmine.

Jasmine Sambac is well regarded as an aphrodisiac, though it is also considered an antidepressant, sedative, and antispasmodic.

Jasmine Sambac generally works with all oils. It helps to round out scents, and tends to work particularly well with other aphrodisiac oils (Sandalwood and Ylang Ylang for example)

Since ancient times, Jasmine has been referred to as the King of oils (Rose is the Queen). Apparently this is because Jasmine is the most masculine of all the floral oils. It is also interesting to note that It takes 22,000 carefully hand-picked blossoms to produce 1 gram (about 1 ml.) of Jasmine Absolute.

Medieval Arabic “zanbaq“ means jasmine flower-oil from the flowers of any species of jasmine. This word entered late medieval Latin as “sambacus“ and “zambacca“ with the same meaning as the Arabic, and then in post-medieval Latin plant taxonomy the word was adopted as a label for the Jasminum sambac species.