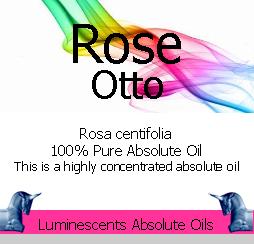 SCENT: Rose Otto is a very complex, sweet floral scent which is highly prized, much cherished and considered to be the finest of all the rose oils. Its reputation of being a must ingredient in perfumes is well deserved.

The Centifolia Rose from which Rose Otto Absolute Oil is obtained is one of the worlds best known flowers – stunning and exotic in both visual appearance and aroma. Rosa centifolia, so named for it plethora of petals is sometimes known as the hundred petalled or cabbage rose. Rose Otto is merely named or it shostorical aasociations with the Ottoman Empire from which the term “Otto” is derived and is just a different appreciation of the word “Attar”

It is commonly held to be true that Rosa Otto and Rosa Damascene are completely different oil types. It is quite untrue – they may have slightly different floral notes and, of course, may originate from a different soil type depending upon where the plant is cultivated and eventually harvested but essentially, the two oils are the same “type” and are merely garnered from different rose species.

However Rosa Otto is considered to be the finest of all the Rose oils followed closely by Rosa Damascena, hence their elevated cost.

Rose Otto is a very common oil in the perfume and aromatic industry. Aromatherapists also credit it with being an exotic aphrodisiac, as an emollient in skin care products, and as a balancer of the spirit.