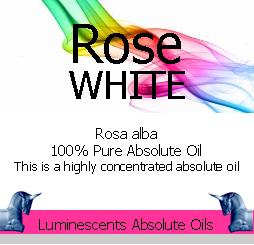 SCENT: White Rose Bulgarian is a very complex, sweet floral scent with a hint of spice Its reputation of being a must ingredient in perfumes is well deserved.

Rosa alba from which this White Rose Bulgarian Absolute Oil  is obtained is the White Rose of York and has been prized for centuries even though its provenance is not known – its parentage is a completely mystery.

Now, you’d think that its name would suggest that the rose itself, sweet and strongly aromatic with a fine hint of spice, would have just white flowers but in fact it can have an array of pink to red flowers too. It is a rose that has an odd chromosomal arrangement so that it does not interbreed with others easily.

White Rose Bulgarian is a very rare Absolute oil and almost completely confined to use within the perfume and aromatic industry. Aromatherapists credit it with being an exotic aphrodisiac, as an emollient in skin care products, and as a balancer of the spirit.