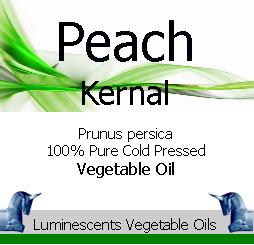 AROMATIC: Peach Kernal Oil has very little scent characteristics but like all cold pressed and untreated vegetable oils, has a slight fatty note.

ABSORPTION: Peach Kernal Oil  is readily absorbed in to the skin

SHELF LIFE: Peach Kernel is slow to become rancid; users can expect 6 Months to 1 Year with proper Storage (cool, out of direct sunlight). Refrigeration after opening is recommended.

Peach Kernel is an excellent emollient and is known for its ability to soften and re-condition the skin. It is considered extremely nourishing – particularly when used regularly. It has a very similar consistency to Almond Oil and they are often stated as substitutes for each other.

The tree is native to China and bears a juicy fruit of the same name. It is a small deciduous tree growing to 510 m tall.

The scientific name persica derives from an early European belief that peaches were native to Persia (now Iran). The modern botanical consensus is that they originate in China, and were introduced to Persia and the Mediterranean region along the Silk Road in early historical times, probably by about 2000 BC

Peach Kernel oil is used in massage, cosmetics and soap manufacturing especially favoured for facial massages as it encourages suppleness and elasticity.