View basket “Arjuna Bark – Terminalia arjuna” has been added to your basket. 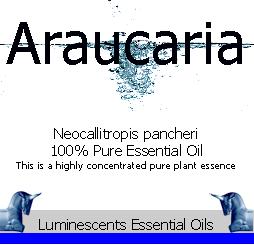 SKU: LU1007. Categories: All Oils Beginning with A, Essential Oils.

Neocallitropis-pancheri or the Monkey Puzzle Tree , Monkey Tail Tree, Chilean Pine, or Pehuén from which Araucaria Essential oil is distilled (sometimes spelt Arucaria) is an evergreen which can grow up to 130 feet in height and with a trunk around 5 feet in diameter native to central and southern Chile and Western Argentina in South America although this oil comes from Norfolk Island where it also grown as well as the nearby archipelago of New Caledonia.

It is an extremely long lived species and is called, by many,  a living fossil. It is the national tree of Chile and it is now considered endangered in South America due to over harvesting and the impact of humans changing its habitat which is why this oil is from Norfolk Island. Norfolk Island is famous for its Pine trees and this oil is often confused and sometimes mis-sold as Norfolk Island Pine which, whilst closely related, is in fact Araucaria heterophylla

It is considered a diocesious tree with the male and female cones on separate trees, though unusually occasional individuals bear cones of both sexes.

The recently found Wollemi pine discovered in south-east Australia, is a relative as is the Norfolk Island Pine. Their common ancestry dates to a time when Australia, Antarctica and South America were linked by land as  all three current continents were once part of the super continent known as Gondwana.

It has no reported aromatherapy associations.