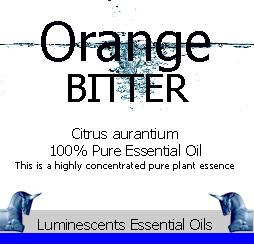 SCENT: Bitter Orange Essential Oil has a very sweet citrus smell characteristic of sweet orange, while also carrying some of the bitterness of grapefruit.

The bitter orange has properties very similar to the sweet orange. They include the following properties: antidepressant, antiseptic, antispasmodic, aphrodisiac, carminative, cordial, deodorant, digestive, stimulant (nervous), tonic (cardiac, circulatory). Orange Bitter essential may be used in the same way as oil of turpentine in chronic bronchitis. It is non-irritant to the kidneys and pleasant to take. It has also been applied to combat Colds, constipation, dull skin, flatulence, the flu, gums, slow digestion, and stress.