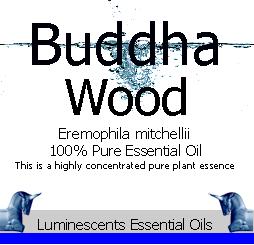 SCENT: The scented wood is burnt for its pleasant aroma and is spicy but the taste is bitter. The oil has a similar aroma.

Buddha Wood is sometimes known as False Sandalwood (as is Amyris) and is an evergreen and resinous shrub to small tree 3-8 m in height, (a woody weed), growing in many areas predominately found on Western slopes and plains of NSW and Queensland in Australia. It has dark rough bark, with hairless leaves that are bright green and aromatic. It is a common and invasive tree.

Traditional and Emotional uses reportedly include:- Sore muscles and joints when used as a massage oil. It is a useful addition in men’s toiletries because of its colour and the balsamic scent is used as a fixative in perfumery because of its unique and woody odour.

It is active against some pathogenic micro organisms.

Not known to blend well with other oils although there is some opinion that resinous wood oils like cedarwood and some citrus oils blend adequately and pleasingly.

The Latin name for the plant derives from the following:-

a lonely place or desert (eremos)

and named after Sir Thomas Mitchell, the 19th century explorer and botanist.

The native Aboriginal peoples of Australia would use the wood and the bark as a treatment for rheumatism.