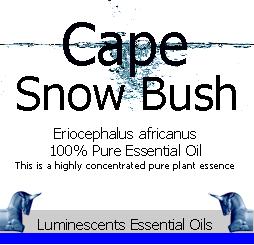 Eriocephalus africanus from which Cape Snowbush Essential Oil is distilled is a bushy little evergreen shrub native to South Africa paricularly the Western and Eastern Cape with dark green glossy needles and a multitude of tiny white flowers.

It is very fragrant and has soft slightly felt like foliage making it seem silvery in appearance.

The plant has been used in traditional medicine and in flavouring in culinary terms.

It is diuretic and carminative, haemostatic and styptic. Any man who has used a styptic pencil will be familiar with the term as it means to stop minor topical bleeding as in a razor cut. Its main constituents are Linalyl acetate, cymene, 1.8-cineole, many sequiterpinoids.

The essential oil is antiseptic and is also an effective decongestant, helping to relieve the symptoms of colds and influenza.

In the late 17th Century a botanist by the name of Schreyver visited the Cape and distilled a plant called ‘roosmaryn’ which the Boers called the Cape Snowbush which was growing in the Company’s garden. He wrote of it as “this precious rosemary oil”. This is the earliest record of an essential oil extract from a South African plant.