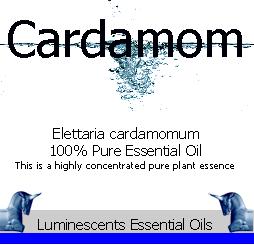 COLOUR: Cardamom Essential Oil is pale yellow to deep yellow as it ages.

Elettaria cardamomum from which Cardamom Essential Oil is distilled is a perennial, reed-like herb, growing wild and is cultivated in India and Sri Lanka. It grows up to 4 metres (13 feet) in height and has long, green silky blades, small yellowy flowers, with a violet tip and a large fleshy rhizome, similar to ginger. Oblong gray fruits follow the flowers, each containing many seeds. It is a native of India which was the largest producer in the 20th Century and Pakistan, Bangladesh, Indonesia, Nepal and Bhutan.

It is now also grown as a cash crop in South America, particularly Guatemala where it was introduced just after the 1st World War. Guatemala is now the largest producer of Cardamom in the world. Sril Lanka has recently joined the nations which grow it as a cash crop.

Cardamom is the the third most expensive spice after Saffron and Vanilla.

It is a laxative and soothes colic, wind, dyspepsia and nausea. As a massage oil or diluted in the bath, Cardamom essential oil is reported to assist with the digestive system, coughs and is a general tonic.

Cardamom was well known in ancient times. The Egyptians used it in perfumes and incense and chewed it to whiten their teeth. The Romans used it for their stomachs when they over-indulged. The Arabs used it ground in their coffee and It is still an important ingredient in Asian cooking today.