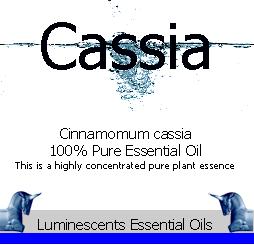 SCENT: Pungent, warm smell. Cassia contains 1% to 2% volatile oil (cassia oil), which is mainly responsible for the spicy aroma and taste. Like other bark materials, it also contains tannins, sugars, resins, and mucilage, among other constituents.

Cassia is an evergreen tree growing to 7 metres with a white aromatic bark and angular branches. The leaves are oblong-lancelate about 18 cm (7 in) long. Small yellow flowers hang from long stocks, and bloom in early summer. Cassia grows in hot, wet, tropical climates both wild and commercially. The stems are cut down when the bark is mature. The bark is removed in short lengths and dried, with some varieties rolling into quills.

Also known as Bastard Cinnamon and Chinese Cinnamon, Cassia has been used medicinally in China for several thousand years. Its first recorded use dates back to the Han Dynasty (200 B.D.-A.D. 200)..