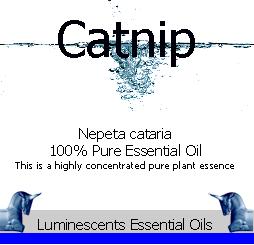 SCENT: Catnip Essential Oil has a light minty aroma with a touch of heady lemon rind

STRENGTH OF AROMA: Medium to strong

COLOUR: Catnip Essential Oil has a golden yellow hue darkening to brown as it ages

Nepeta cataria from which Catnip essential oil is distilled  is very difficult to obtain from the plant as it is remarkably thin. The first fraction is lighter than the water and the second one is a tiny bit heavier so they have to be collected separately. Yield of the oil is low because the plant itself is very reactive to cold and frost. The entire crop can be killed in a single night. It is the reason it is more expensive an oil that one might at first realise.

It is also known as Catmint, Catwort  or Nepeta

It is reputed to act as a topical anaesthetic, anti-inflammatory, anti-rheumatic, astringent, carminative, nervine, sedative. There is little documentary evidence, however, it has a long history as an insect repellent, reportedly more effective than either Citronella or May Chang.

The herb was once a very popular European infusion before the advent and the importation of black and green teas from the far east as that trade developed. It is still used as such and makes a refreshing minty tea much loved as an alternative to the popular Peppermint tea combinations available.

The plant contains nepetalactone which is a terpenoid and makes it attractive to cats and an insect repellent.