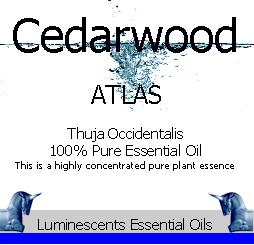 SCENT: Cedarwood Atlas essential oil has a woody, sweet, sharper note than Virginian cedarwood, it has a slight aroma reminiscent of artificial mothballs, pencil shavings and is balsamic.

Cedarwood Atlas is a pyramid-shaped majestic evergreen tree, up to 131 ft. high. The wood itself is hard and strongly aromatic because of the high percentage of essential oil it contains. It is the most common of the Cedar Essential Oils yet the tree is considered a threatened species in it native habitat.

It is a native of the Atlas mountains of Morocco (Middle Atlas, High Atlas)  to the  Rif and to the Tell Atlas in Algeria.

It is considered a useful aid in the control and prevention of acne, and to soothe the discomfort of arthritis, bronchitis, coughing, cystitis, dandruff, dermatitis, stress. It is a warming, uplifting, and toning oil. Comforting and reviving. Considered an aphrodisiac in that it is grounding and inspiring at the same time.

Cedarwood Atlas blends well with the citrus oils, giving them a base note that very nicely complements them. Also with Rosemary, Chamomile, Eucalyptus and many more.