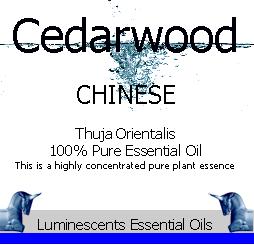 Cedarwood Chinese is an evergreen tree or shrub with a wide distribution in Guizhou, Gansu and Sichuan provinces in the People’s Republic of China. The Chinese oil has a lower cedrol content than American oil and is used more in its own right as fragrance oil than as a source of chemical isolates.

Numerous herbal and pet shampoos and natural repellents contain cedarwood oil as an active ingredient. Fences made from cedarwood posts are still sound after several decades of use. Cedar chests are known to be safe places to store woollen articles and protect them from the ravages of cloth moth larvae.

Used in excess, this essential can produce unpleasant results; it was officially listed as an abortifacient (a drug or agent causing abortion) and convulsant in overdose. The leaf oil is considered toxic, causing hypo tension (low blood pressure), and convulsions. Fatalities have been reported.