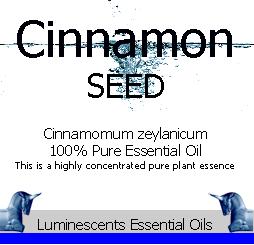 SCENT: Cinnamon Seed essential oil has a warm, spicy scent that is somewhere between clove and cinnamon and is a lighter fragrance than the bark or leaf. It is slightly herbaceous with pepper notes.

The Cinnamon Tree (Cinnamomum zeylanicum) and from which this Cinnamon Seed Essential Oil is distilled, is an evergreen native to China and Vietnam that has since been cultivated in many other regions of the world. It has large shiny, leathery green leaves, and small, white flowers with oval shaped purple berries. The best is now considered to come from Sri Lanka (formerly Ceylon) and the essential oil from the bark or seed is much rarer than the more usually sold leaf oil.