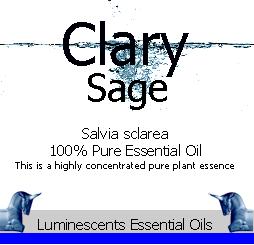 SCENT: Clary Sage essential oil has an earthy, fruity and floral aroma that is both nutty and herbaceous.

Salvia sclarea from which Clary Sage Essential Oil is distilled is a short biennial or perennial herb that grows up to 1 metre in height. It has large, hairy leaves with small attractive bluish – purple flowers. It is native to the Northern Mediterranean, northernmost parts of Africa and some regions of Asia.

Its spiritual attribute is credited as being euphoric. Clary Sage is viewed by aromatherapists as an antidepressant, and antispasmodic, deodorant, emmenagogue, hypotensive, nervine, sedative, tonic and uterine. It is used in some preparations for greasy hair.

It is used a very common ingredient in perfume as well a flavouring for vermouths, wines, and liqueurs.

The name Clary Sage is derived from the Latin word for “clear” – probably because the herb was once used for clearing mucous from the eyes. During the sixteenth century it was also used in England for brewing beer as a replacement for hops.  Theophrastus (4th Century BC) Dioscorides (1st Century AD) and Pliny the Elder (1st Centurey AD) all wrote about the plant and its medicinal efficacy.