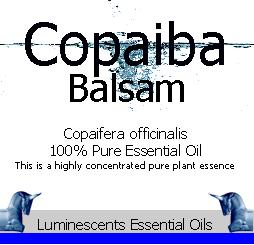 SCENT: Copaiba Balsam essential oil has a warm, honey-like scent. It is rich and pleasant; it is easily identifiable as a base note.

CONSISTENCY: Medium to viscous and requires gentle warming to make it workable

Copaiba Balsam resin is extracted from the wild trees which are found mainly in the South American rain forests – particularly in Brazil, Columbia, Peru and Venezuela.It is the further refined to produce the oil.

The trees have large branches and can grow up to 18 to 30 metres in height. The resin is harvested by tapping or drilling holes into the trunk of the tree much like tapping maple for syrup. Although this resin is often referred to as balsam, it is not a true balsam but an oleoresin.

A single Copaiba tree can provide about 40 litres of oleoresin annually, making it a sustainable rain forest resource that can be harvested without destroying the tree or the forest in which it grows. When tapped, the initial oily resin is clear, thin, and colourless; it thickens and darkens upon contact with air.

Commercially sold resins are a thick liquid, with a colour that varies from pale yellow to golden light brown. The variety gathered in Venezuela is said to be thicker and darker in colour.

Soothing, balancing, uplifting on its own. In combination with other essential oils it is a great fixative that binds more volatile aromas and extends their life.

Copaiba balsam essential oil blends well with oils from the spice family, oils from the floral family, and essential oils with Oriental bases. It also work well with the so called aphrodisiac oils  Rose, Jasmine, Sandalwood, and Frankincense. It can also support the softer qualities of oils such as Ylang Ylang, Vanilla or Jasmine.

Copaiba resin was first recorded in European medicine in 1625 (brought back from the New World by the Jesuits and called Jesuit’s balsam) and has been used since in the treatment of chronic cystitis, bronchitis, chronic diarrhoea, and as a topical preparation for haemorrhoids. In the United States, it was an official drug in the U. S. Pharmacopeia from 1820 to 1910. Noted ethnobotanist and author Mark Plotkin reports that Copaiba oil has been used in the United States as a disinfectant, diuretic, laxative, and stimulant-in addition to being used in cosmetics and soaps. The Encyclopedia of Common Natural Ingredients cites that Copaiba has diuretic, antibacterial, anti-inflammatory, expectorant, disinfectant, and stimulant activities.

May cause some skin sensitisation.