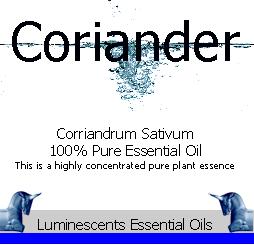 SCENT: Coriander essential oil has a sweet, spicy, slightly fruity, herbaceous warm smell. It has been claimed by some aromatherapists that the aroma improves if allowed to age.

Corriandrum sativum from which Coriander Essential Oil is distilled, whether the annual or biennial plant, is a native of Morocco and grows to about 1 metre in height. It has sparse, fine, feathery leaves and pinkish/white flowers. The brownish, globose seeds have a disagreeable smell until they ripen, when they take on their spicy aroma. It has bright green delicate leaves, umbels of lace-like white flowers which are followed by a mass of green (turning brown) round seeds. These seeds are hard and egg-shaped, borne in pairs, which do not separate easily.

Spiritually Coriander oil is used to refresh and awake the mind and for mental fatigue.