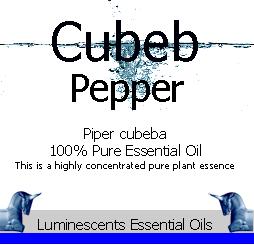 Cubeb Pepper is also known as the Tailed pepper or Java Pepper of the pepper family, is grown in Indonesia, particularly Java, also in The Congo and Sierre Leone in Africa. The berries from the woody vines are used to make the essential oil.

The Cubeb came to Europe via India through the trade with the Arabs. The name Cubeb comes from Arabic kababah which is of unknown origin, by way of Old French quibibes.