View basket “Ceylon Orange Pekoe” has been added to your basket. 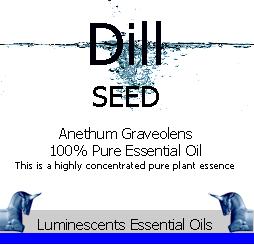 SCENT: Dill Seed Essential Oil  has a fresh, herbaceous scent that is gentle, warm, and spicy.

STRENGTH OF AROMA:  Medium to strong

Dill Seed , from which the essential oil is steam distilled, is a member of the Umbelliferae (parsley) family. Growing to about one metre high with a mass of small yellow flowers, appearing in the summer.

Much like Fennel seeds, It is said that Dill seeds were chewed by early Americans to suppress their appetites during church services. The name Dill is derived from the Norse word Dilla meaning to lull, relating to the carminative properties of the herb.

During the Middle Ages, Dill was thought to have magical properties and was used against witchcraft. If someone thought a witch had cast a spell on them, they would make a special drink which contained Dill leaves to protect themselves from the spell or wear a charm made from Dill leaves. They also burned Dill leaves to clear thunderstorms. Charlemagne had vials of Dill tea available at dinners to stop the hiccoughs of guests.