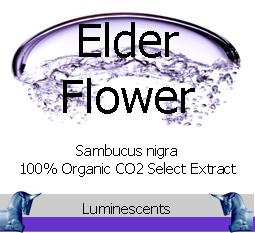 SCENT: Elder Flower Organic Essential Oil CO2 Select Extract has a honeyed syrupy fragrance with slight anise like tendencies. It is pure Elder Flower in a bottle and a delight.

Sambucus nigra from which Elder Flower Organic Essential Oil CO2 Select Extract is obtained is genus of between 5-30 species of fast-growing shrubs or small trees (two species herbaceous), formerly treated in the honeysuckle family Caprifoliaceae, but now shown by genetic evidence to be correctly classified in the moschatel family Adoxaceae.

More closely alike to the blossoms of this fine shrub with grassy, lemony, and warm, accords. This is an elusive, hard to find and understated extract that is quite rightly highly prized and much sought after and relished when found. Used almost exclusively in perfume manufacture, a divine scent with little of the yeasty attributes the absolute oil of the same shows.

A few clinical studies have shown effectiveness of Sambucol, a formulation based on an extract of Elder, in the treatment of both adults and children with either type A or B influenza. Sambucol reduced both the severity and duration of flu symptoms in otherwise healthy subjects, but should not be considered a substitute for influenza vaccination in high risk individuals. An in vitro study of Sambucol showed possible effectiveness against the H5N1 avian influenza virus.