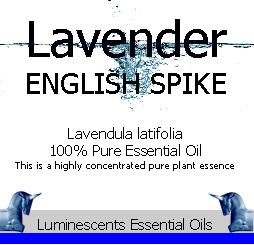 SCENT: Lavender English Spike essential oil is not considered to be anywhere near as valuable as that of Lavendula augustifolia due to its camphory, menthol-like aroma. Lavendula latifolia crossed with Lavendula angustifolia produces the Lavendula x intermedias or lavender hybrids called Lavandins which ARE highly prized.

English Spike Lavender (Lavendual latifolia) is a evergreen shrubby perennial which has been grown commercially for various uses including aromatherapy. This plant’s foliage can be distinguished from Lavender angustifolia due to its narrow coarser leaves. Blue gray flowers are produced on this plant which grows wild in the Mediterranean and all over the UK where it has regained its reputation as English Lavender. It produces an abundance of oil.