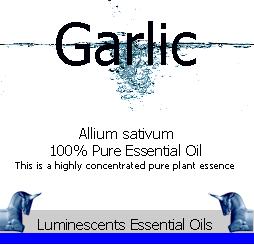 SCENT: Garlic Essential Oil is a powerful antiseptic, extremely strong in odour which lingers long after the source has been put away and is possibly the most powerfully odourous among all essential oils.

Garlic is a perennial plant in the family Alliaceae and genus Allium, closely related to the onion, shallot, and leek. It does not grow in the wild, and is thought to have arisen in cultivation, probably descended from the species Allium longicuspis, which grows wild in south-western Asia. |The Herb has been used throughout all of recorded history for both culinary and medicinal purposes.

The portion of the plant most often consumed is an underground storage structure called a head. A head of garlic is composed of a dozen or more discrete cloves, each of which is a botanical bulb, an underground structure comprised of thickened leaf bases. Each clove may often be composed of just one leaf base, unlike onions, which almost always have multiple layers. The above-ground portions of the plant are also sometimes consumed, particularly while immature and tender.

Garlic has a powerful pungent or “hot” flavour when raw, which mellows considerably when it is cooked. Raw or cooked, garlic is noted for its strong characteristic odour, and for giving those who eat it a distinctive breath odour as well. Some cultures accept the odour of the herb more than others. Northern European cuisines, for example, use garlic only modestly and tend to cook it for long periods of time to diminish its strength.

It has no modern aromatherapy associations at all. In modern naturopathy, garlic itself, not the oil, is used as a treatment for intestinal worms.

Quite simply – it doesn’t blend with anything, rather it overpowers all other oils.

From the earliest times garlic has been used as an article of diet. It is the most widely used component of the Lebanese cuisine. Many Lebanese salads contain a garlic sauce. It formed part of the food of the Israelites in Egypt (Numbers. xi. 5) and of the labourers employed by Khufu in the construction of his pyramid. Garlic is still grown in Egypt, where, however, the Syrian variety is the kind most esteemed (see Rawlinson’s Herodotus, 2.125).

It was largely consumed by the ancient Greek and Roman soldiers, sailors and rural classes and, as Pliny tells us, by the African peasantry. Galen eulogizes it as the “rustic’s theriac” (cure-all) and Alexander Neckam, a writer of the 12th century, recommends it as a palliative of the heat of the sun in field labor.

Pliny the Elder, in his Natural History, gives an exceedingly long list of scenarios in which it was considered beneficial. Dr. T. Sydenham valued it as an application in confluent smallpox, and, says Cullen, found some dropsies cured by it alone. Early in the 20th century, it was sometimes used in the treatment of pulmonary tuberculosis or phthisis.

Garlic was rare in traditional English cuisine (though it is stated to have been grown in England before 1548), and a much more common ingredient in Mediterranean Europe.

Garlic was placed by the ancient Greeks on the piles of stones at cross-roads, as a supper for Hecate and according to Pliny, garlic and onions were invoked as deities by the Egyptians at the taking of oaths. The inhabitants of Pelusium in lower Egypt, who worshipped the onion, are said to have held both it and garlic in aversion as food.

To prevent the plant from running to leaf, Pliny advised bending the stalk downward and covering with earth; seeding, he observes, may be prevented by twisting the stalk (by “seeding”, he most likely means the development of small, less potent bulbs).

Allium sativum has been seen as a force for both good and evil. A Christian myth says that after Satan left the Garden of Eden, the herb arose in his left footprint, and onion in the right. Even in Europe, though, many cultures have turned to garlic as a protective force or white magic, maybe because of its reputation as a powerful preventative medicine. Central European folk beliefs considered the herb a powerful ward against devils, werewolves, and vampires. To ward off vampires, garlic could be worn on one’s person, hung in windows, or rubbed on chimneys and keyholes.