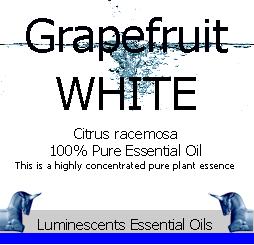 SCENT: Grapefruit white essential oil has a fresh, slightly bitter citrus scent that is very characteristic of the fruit.

The grapefruit tree was originally from Asia. It is now grown and harvested in the United States, France, Brazil and Israel. The Grapefruit tree itself is a large, shiny gloss-leaved tree, about 10 metres high, with white flowers and large, pale yellow fruit.

Grapefruit white essential oil is believed by aromatherapists to be a spiritual up-lifter, and to ease muscle fatigue and stiffness. It is also considered to be a purifier of congested, oily and acne prone skin. Grapefruit oil is also sometimes added to creams and lotions as a natural toner, and in some circles it is believed to promote hair growth though there is not any medical documentation verifying this.

The differences between the White and Pink Grapefruit are minor. The difference in cost is simply an example of supply and demand; there is more pink grapefruit produced because it is sweeter than the white variety.

May cause some photosensitive issues in some.