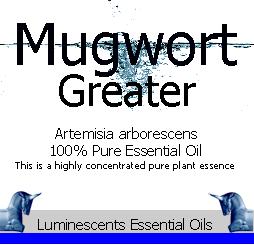 Great Mugwort (Artemisia arborescens)  is native to the Mediterranean region. It is an erect evergreen perennial plant, with masses of finely-divided aromatic silvery-white leaves and single-sided sprays of yellow daisy-like flowers. This plant is cultivated for its foliage effects, but in colder and more temperate regions it requires the protection of a wall. All parts of the plant are very bitter and it is not fed upon by many animals although those that do have a bitter taste themselves when eaten.

It is sometimes called Tree Wormwood simply because arborescens means tree like and the genus is named Artemisia from Artemis, the Greek name for Diana. It is also known occasionally as Giant Mugwort or even more rarely as Balloon Blue Wormwood

CAUTIONS: Use well diluted. The essential oil is toxic, arbortifacient and a neurotoxin.