View basket “Pumpkin Seeds” has been added to your basket. 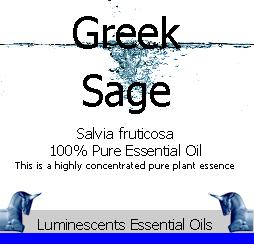 SCENT: Greek Sage essential oil has a spicy, sharp, and very herbaceous scent. It is referred to as having a penetrating and powerful aroma.

Salvia fruticosa (syn. triloba) from the Ladiatae family and from which Greek Sage Essential Oil is distilled, is also known as Greek Oregano ( we have no idea why?) and less so nowadays as Spanish Sage. It is a native to the eastern Mediterranean, including southern Italy, the Canary Islands and North Africa. It is especially abundant in Israel

The therapeutic properties of Sage Essential oil are as an anti-inflammatory, antiseptic, astringent, digestive, diuretic, emmenagogue, insecticide, laxative and as a tonic.

It has a long tradition of use in Greece, where it is valued for its medicinal attributes and its attractiveness. It is also used in cooking for centuries.

Greek Sage was depicted in Minoan frescos from around 1400 BCE at Knossos on the island of Crete. The ancient Phoenicians and Greeks are likely to have introduced the plant for cultivation to the Iberian peninsula, with remnant populations of these introduced plants still found in some coastal areas

The Chinese believed Sage cured sterility and the Romans believed it cured just about everything. The Latin word ‘salvare’ means to  ‘heal’ or to ‘save’. During the Middle Ages, Sage was a popular ingredient of many nerve tonics and the actual herb was used to clean gums which is quite effective and still used by many today. Its antiseptic and astringent attributes makes it a good mouth cleanser and tightens the gums to the teeth.

Sage is a powerful oil in the hands of an experienced aromatherapists and should be used with care. It is an oral toxin and should not be used by persons suffering from epilepsy or high blood pressure.