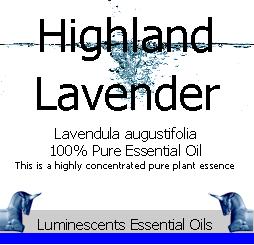 SCENT: Highland Lavender Essential Oil has a sweet floral note preferred by many. It is very similar in scent to the more common Lavender Population and the rarer but no less delicious Mont Blanc. Due to the different growing conditions (altitude, soil conditions, sun exposure, access to water), practitioners can expect this oil to provide some subtle differences in tone.

Highland Lavender, as its name suggests, is a high altitude lavender and not a Lavender from the Highlands of Scotland.

It is very similar in scent to Lavender Mont Blanc and the more common Lavender Population. Due to the different growing conditions (altitude, soil conditions, sun exposure, access to water), practitioners can expect this oil to provide some subtle differences in tone.

It is a high therapeutic grade comparable in status to the other well known high altitude lavender, Mont Blanc or perhaps the better known Lavender Population. The different soil, temperature, precipitation, etc. contributes to some subtle changes in scent.