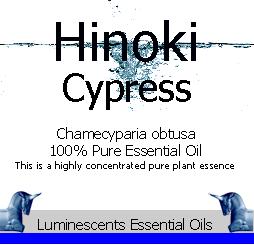 Hinoki is a Japanese oil from the Japanese Cypress tree, better known as the Hinoki Cypress

Used as an insect repellent rather like citronella and May Chang. It can also be added to shampoos, conditioners, skin lotions

Hinoki was once and, to a certain extent still is, the preferred wood for building palaces, temples, shrines and bath houses. It is the wood from which the Imperial palaces were bulit. Hinoki is a cypress that grows only in Japan. It is a light coloured wood which does not deteriorate easily or quickly.