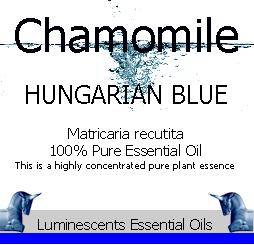 analgesic, anti-spasmodic, antibiotic, anti-inflammatory, emmenagogue, digestive, hepatic and vulnerary. Hungarian Blue Chamomile contains Azulene, a powerful anti-inflammatory agent. This blue crystal is not actually present in the plant, but forms in the oil and only a small quantity is needed. The quality is generally graded by the azulene content and good quality oil should contain between 4.5  5%. It is this azulene that gives it a blue colour.