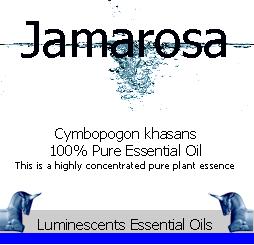 SCENT: Jamarosa Root Essential Oil consists of 75% of geraniol and 20% of geranyl acetate. The oil has a rosy-grassy odour with a terpenic bynote, which is not so sweet rosy as palmarosa oil

Cymbopogon khasans, from which Jamarosa Root Essential Oil is distilled, is a grass hybrid – Cymbopogon nardus var. confertiflorus x Cymbopogon jwarancusa. It is related to Palmarosa and used in much the same way. Its a tough old grass generally harvested from the wild in Northern India and is one of those plants encouraged to halt soil erosion as its roots bind the soil effectively.

Jamarosa Essential Oil consists of 75% of geraniol and 20% of geranyl acetate. The oil has a rosy-grassy odour with a terpenic bynote, which is not considered to be so sweetly rosy as it cousin, Palmarosa oil

Jamarosa Root essential oil is most commonly used as a natural fragrance compound but, like its cousin Palmarosa, it is also considered to be good for oily skin complaints and skin care in general. It is most commonly used for its fixative qualities when employed in the perfume industry as well as imparting its slight rose and green characteristics to the final creation.

Some aromatherapists claim it is good for reducing the appearance of scar tissue and speeds up healthy skin replacement in cases of minor wounds.

Jamarosa root oil has been traditionally used as a perfumery compound when requiring a rose character.