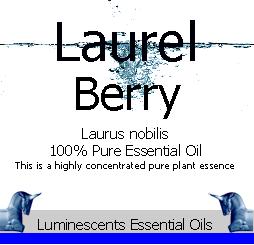 The Laurel Tree, the leaves from which Laurel Berry Essential Oil is distilled is a small unimpressive shrub or tree, originating in  eastern Mediterranean countries. The evergreen tree reaches maturity after five years and yields about 2 kg of berries per season, which in turn gives about 50-70 g of essential oil. Not a great deal of oil per kilo of berry.

Laurel Berry Essential Oil is known for its strong effects on the nervous system. Its antispasmodic and analgesic properties make it mildly narcotic. Coupled with its sedative properties, it is used for neuritis, depression, anxiety, fear and psychosis. Its stimulating and warming properties are used to produce fire and warmth in one’s emotions, bringing awareness, courage and confidence. In massage it is used to relieve the symptoms of Arthritis and Rheumatism as well as earache.

Laurel has been known for thousands of years, but the use of its leaves as a household culinary herb is a comparatively recent one. The tree figures prominently in ancient cultures