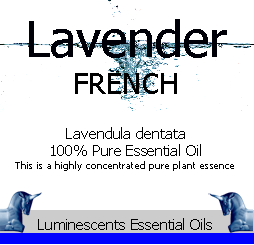 SCENT: Lavender French Essential Oil is produced in Provence, France. This oil has a sweet floral note preferred by many.

Lavender French Essential Oil is distilled from the species Lavendula dentata which is an evergreen woody shrub, up to 1 metre tall, with pale green, narrow linear leaves and violet blue flowers.