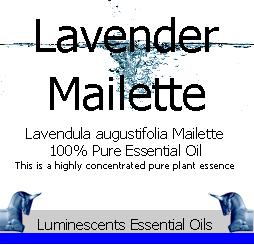 SCENT: Lavender Mailette essential oil smells very strongly, as one might expect, and is now considered one of the most fragrant of all Lavender oils.

English Lavender Mailette is an evergreen shrubby perennial which has been grown commercially for various uses including aromatherapy. It is now the most popular of the Lavendulas grown in France due to its high yield, greater fragrance and disease resistance.