View basket “Siberian Ginseng Powder-Eleutherococcus senticosus” has been added to your basket. 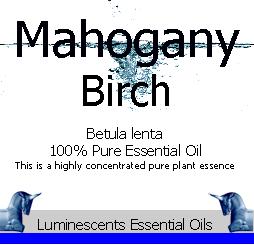 Betula lenta from which Mahogany Birch essential oil is distilled should not to be confused with white birch or birch tar and is also and variously known as Black Birch, Sweet Birch, Cherry Birch, or Spice Birch. It is a native to North America and quite often confused with Wintergreen which is now used more often as its aroma and actions are very similar in many respects.

Mahogany Birch Essential Oil is anti inflammatory so is frequently used in rheumatism and joint pain therapies. It has historical use as being good for treating psoriasis, gout, ulcers, and broken bones. It is also mildy diuretic.