View basket “Cerulian Ice” has been added to your basket. 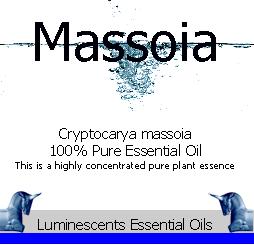 The Massoia tree is a medium-sized tree of the Lauracean family from New Guinea. It has optimal growth in rainforests between 400 m and 1000 m altitude. The aromatic bark from the tree has been an article of commerce for centuries. The bark is obtained by cutting the tree at the base, making circular incisions at one meter intervals, lifting the bark off and allowing it to dry. Each tree yields on average 65 kg of air dried bark. Current global supply of Massoia bark oil comes from Indonesia, primarily from Irian jaya which is the western half of New Guinea.

Traditional Attributes of The Essential Oil:-

Used in improving circulation and reputed to have some aphrodisiac qualities. It has been used by Javanese and Balinese women to prepare a warming ointment, called bobory, with a pleasant smell. It is said that white people get a scarlet blushing of the skin from this remedy, and today the concentrated oil from Massoia bark is considered a skin irritant. It is most usually used nowdays as a flavouring component.

Not documented as blending well with other oils.

First collected and brought back to the Royal Botanical Gardens at Kew in 1875 the tree would have been known as Massoia aromatica. The genus includes more than 350 species.