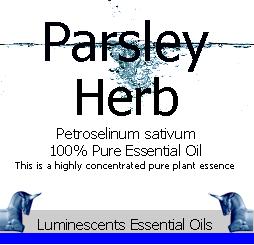 SCENT: Parsley Herb essential oil does not smell at all like the culinary herb. It has a sweet, warm spicy scent. It is herbaceous and green in tone.

Parsley is a biennial – or short-lived – perennial herb that can grow up to 70cm high. It has bright green foliage that is wrinkled in appearance and small greenish-yellow flowers that produce small brown seeds.

Aromatherapists credit Parsley essential oil with having the following properties: antimicrobal, antirheumatic, antiseptic, astringent, carminative, diuretic, depurative, emmenagogue, febrifuge, hypotensive, laxative, stimulant (mild), stomachic, and uterine tonic. You will also see it used in soaps, detergents, cosmetics, and mens colognes. Parsley is valued as a breath-freshener, due to its high concentration of chlorophyll.

BLENDS WELL WITH Parsley blends well with orange, Rose, Cananga, Tea Tree, Clary Sage and any of the spice oils.

While Parsley is now regularly used as a meal garnish, in ancient times it was never brought to the table. It was viewed as sacred and belonging to the dead or those cast to oblivion. In fact, in Europe it was believed than anyone growing parsley would die within a year and in some parts of the continent it was believed that anyone who was able to germinate the seeds was intrinsically evil.

CAUTIONS: Parsley essential oil is viewed as moderately toxic and irritating. It should always be used in dilution as with almost all essential oils, and avoided during pregnancy. Parsley is high in oxalic acid, a compound involved in the formation of kidney stones and nutrient deficiencies.