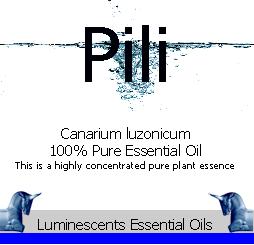 SCENT: Pili essential oil can best be described by comparing it to a dill pickle or fennel with citrus notes. It is surprisingly fresh and clean though, and not as tart as one would expect.

ORIGIN: The Philippines, processed in France

Pili is a tropical tree from the Philippines that can grow up to 30 metres. It exudes a yellow resin when leaves are sprouting.

Aromatic Pili oil is steam distilled from the resin. It is used as an antiseptic, expectorant and stimulating tonic by aromatherapists.

Pili is also known as Elemi. The word elemi has been used at various times to denote different resins. In the 17th and 18th centuries the term usually denoted a resin from trees of the genus Icica in Brazil, and before that it meant the resin derived from Boswellia Frereana. The word, like the older term animi appears to have been derived from enhaemon (???????): the name of a styptic medicine said by Pliny to contain tears exuded by the olive tree of Arabia.

The ancient Egyptians used Pili oil in the embalming process.Pili is now chiefly used commercially in varnishes and lacquers, and certain printing inks