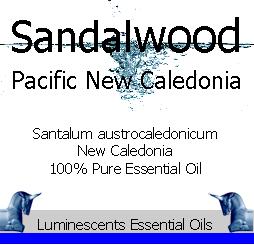 SCENT: Sandalwood Pacific New Caledonia essential oil is sweet, rich, woody, exotic and lingering. oriental, luxurious, and balsamic with deep & soft aroma. Be aware, however, All Sandalwoods fail to impress until they reach body temperature when the luxuriant fragrance is all too evident.

Santalum austrocaledonicum, from which Sandalwood Pacific New Caledonia essential oil is distilled, is a small tree growing up to 13 metres in height at maximum and has rather  greyish bark. It is sometimes called New Caledonian Sandalwood and locals call it Tibo. Like all Sandalwoods, it is parasitic. Most have been removed from their habitat due to logging.  Very few trees remain in the wild.

There are two more variants of this species, Santalum pilosulum, and Santalum minutum.

The Essential Oil blends very well with any top or middle note essential oils. Favorites include: Jasmine, Ylang Ylang, Rosewood, Patchouli, Vetiver. It is also interesting to note that blending Sandalwood with Rose Absolute oil makes for a great sensual and aphrodisiac blend.

Many of the species are currently endangered and consequently very expensive. Although all sandalwood trees in India are government-owned and their harvest is strictly controlled, many trees are illegally cut down and smuggled out of the country by local gangs. Sandal essential oil prices have risen by up to $1500-2500 per kg per year in the last 5 years. Some countries regard the sandal oil trade as ecologically harmful because it encourages the over harvesting of sandalwood trees.

Fire keeping priests, who have maintained sacred fires for centuries, accept sandalwood twigs from Zoroastrian worshippers as their contribution for sustaining the fire.