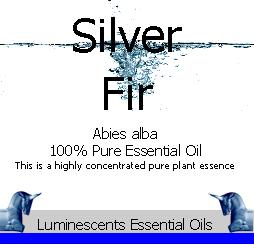 SCENT: Silver Fir Needle essential oil has a fresh, woody, earthy, sweet scent that is much like woodland after the rain.

The Silver Fir (Abies alba) is a species of fir native to the mountains of Europe, from the Pyrenees north to Normandy, east to the Alps and the Carpathians, and south to southern Italy and northern Serbia

It is related to the Scotch Pine and is variously known as The European Silver Fir or sometimes the White Spruce , but under no circumstances should it be confused with the other varieties of Fir Essential oils that are available as it is completely different.

It was once popular over all of Europe because of its medicinal value; it was used to treat muscle pain, rheumatic pain, fever and respiratory problems. It is still a popular fir needle oil in Europe and the U.S. because of its healing association with pine forests. It is a known antiseptic, analgesic, expectorant, stimulant, deodorant & immuno-stimulant.

Silver fir is found as an ingredient in cough and cold pharmaceutical preparations and in remedies for rheumatism; it is commonly used as ingredient in room sprays, disinfectants, perfumes, soaps and deodorants because of its appealing aroma and its ability to banish unpleasant aromas. It can be used as an alternative to scotch pine.