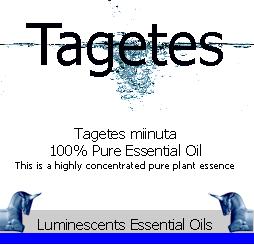 Tagetes is also known in South Africa as Khakibush or elsewhere as Wild Marigold and is native to South Africa. In cultivation, hybrids grown as ornamentals are often known as African Marigolds and have been bred and cross bred to produce a more vivid colouring. The Hybrids are not used for the essential oil.

It is now also grown in France and North America. Tagetes is essentially a weed with deeply divided, dark green leaves with numerous ornamental yellowish-orange and even sometimes white carnation-like flowers with an occasional tinge of deep red feathering.

The essential oil is best known for its ability to keep insects at bay and is widely used as an insect repellent. It is also credited by aromatherapists as helping with parasitic and fungal issues, while also being able to facilitate the flow of mucous and loosening congestion. It has also been used on cuts, sores, and bunions.

After the Boer war in South Africa, Australian troops brought plants to their native land where it grew profusely and is now considered a noxious and invasive weed. The name “Tagetes” comes from the latinised Etruscan name Tages who was a founding prophet of that ancient civilisation whereas Marigold comes from Mary’s Gold, a European cousin of the plant.

The essential oil is very powerful oil and should be used sparingly and only by those with experience working with essential oils. It may also cause photosensitivity