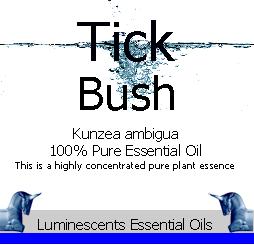 SCENT: Tick Bush Essential Oil has has a fragrance that is said to be refreshing, clean, stimulating and invigorating. Tick Bush is one of Australias newest oils. Tick Bush has a clean balsamic scent with fresh invigorating undertones.

Kunzea ambigua from which Tick Bush Essential Oil is distilled is a tall shrub with abundant white or pink flowers (although the pink flowered variety is sometimes known as Kunzea capitata), which grows in the coolest coastal areas of Australia (Southern New South Wales, Victoria, Tasmania). Its is also known as Kunzea, Poverty Bush, White Cloud and Southern Spring Flower

Kunzea ambigua is registered with the Australian Therapeutic Goods Administration for the relief of symptoms of influenza, arthritis, rheumatism, muscular aches and pains, and to help relieve nervous tension, stress and cases of mild anxiety. In skin care, It has been found to help serious skin conditions such as eczema and rashes.

The essential oil of Kunzea ambigua has been found effective against several bacteria, including Staphylococcus aureus, E. coli and Candida albicans. In many cases, Kunzea ambigua has helped improve severe skin conditions such as eczema, dermatitis, ulcers and chillblains.

Blends well with other Australian natives and with most essential oils including peppermint, lemon myrtle and all the lavenders

Native animals are often found sleeping under Kunzea ambigua plants, where they seek relief from ticks and other parasites – hence the popular name of “tick bush”.