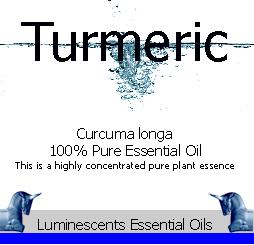 SCENT: Turmeric essential oil has the same spicy, fresh woods aroma as the powdered spice used in Eastern cuisine. Many would argue that the oil is more brilliant, and more aromatic.

Curcuma longa from which Turmeric Essential Oil is distilled, is a perennial plant with deep roots or tubers. It is a vivid orange on the inside and has roots about 2 feet long.

It is a spice commonly used in curries and other South Asian cuisine. Its active ingredient is curcumin. It is a significant ingredient in most commercial curry powders. Turmeric is also used to give a yellow colour to some prepared mustards, tinned chicken broth, and other foods (often as a much cheaper replacement for saffron). It makes a poor fabric dye as it is not very light fast (the degree to which a dye resists fading due to light exposure).

In Ayurvedic medicine, turmeric is thought to have many healthful properties and many in India use it as a readily available antiseptic for cuts and burns. It is taken in some Asian countries as a dietary supplement, which allegedly helps with stomach problems and other ailments. It is popular as a tea in Okinawa, Japan. It is currently being investigated for possible benefits in Alzheimer’s disease, cancer and liver disorders.

Turmeric essential oil is viewed as a strong relaxant and balancer. It also has historical applications as an antiseptic, and for skin care use against acne.

Turmeric essential oil lends a very distinct softness and roundness to any spicy scent or blend. This includes Ginger and other spice oils, as well as Ylang Ylang and Clary Sage – it can colour your blend though.

The traditional use of turmeric was in India as an antiseptic. It has been in very wide use by women for skin care, particularly to discourage facial hair and acne. Turmeric is also well known as a domestic spice around the world.