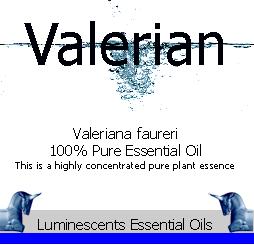 SCENT: Valerian essential oil has an earthy, slightly sweet scent characteristic of an oil derived from a root. Many find it a distasteful aroma.

Valerian (Valeriana faurieri) is native to Europe, North America, and the northern part of Asia. Altogether, the genus contains about 150 different species. These are widely distributed throughout the temperate zones. Both the root and the rhizome are highly prized for their healing properties. The major healing components found in the the root are valepotrits, valeranic acid, valeranone, valereal. These are all volatile oils that are found only in Valeriana faurieri.

The Root as a herb has been used to combat insomnia, nervousness, restlessness, tension, agitation, headaches as the result of nervous tension, and panic attacks. It has also been used on muscle spasms, palpitations of the heart, cardiovascular spasm and neuralgia.

The Root is also believed to be a suitable replacement for catnip based on similar chemical components.

Valerian Root is gaining in popularity as a natural alternative to commercially available sedatives.  Hippocrates described its properties, and later Galen prescribed it as a remedy for insomnia whichit is still used for today.

In medieval Sweden, it was sometimes placed in the wedding clothes of the groom to ward off the “envy” of the elves.