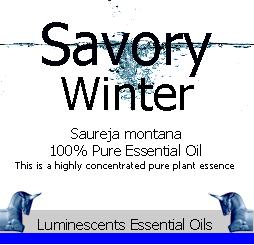 It is often used in companion planting in bean crops as it is effective at keeping away certain pests like weevils and aphids.

Thought to be a remedy for colic and a cure for flatulence, it is also used to treat gastro-enteritis, cystitis, nausea, diarrhoea, bronchial congestion, sore throat and menstrual disorders.

A sprig of the plant, rubbed onto bee or wasp stings, brings relief rather in the manner of dock.

It is reported that this therapeutic-grade oil has been used to inhibit growth of  Candida albicans in tests.

The plant is harvested in the summer when in flower and can be used fresh or dried. The essential oil forms an ingredient in lotions for the scalp in cases of incipient baldness. An ointment made from the plant is used externally to relieve arthritic joints.

Not used in aromatherapy but as a general tonic. It is an antiseptic, carminative and an expectorant. It was once thought to inhibit sexual desire whilst Summer Savory was thought to increase libido.