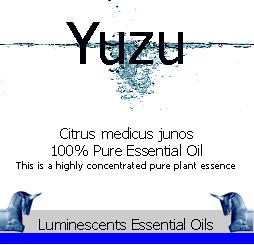 SCENT: Yuzu essential oil has a citrus aroma somewhere between a Grapefruit and a Mandarin

Yuzu trees look like the bitter orange tree (Citrus aurantium) and can grow to a height of around metres. It blooms in autumn. The fruits start to develop in late Autumn and can be dark green to a pale orange/yellow bumpy or dimpled springy fruit with a thick rind. The tree withstands the cold better than most Citrus. It is cultivated in Japan (from where this oil originates) and China. It grows wild in Tibet and the Korean pensinsula.

It is very aromatic

It is antiseptic and anti bacterial and has a calming effect when used in massage. It has very little Bergaptene so current wisdom is that,unlike many of the other Citrus species, it is not likely to be photo-toxic. It is a good stress relieving oil. It is so aromatic that the oil from the rinds is marketed in Europe as a fragrance.

It is an expensive and rare oil because so little of it is produced.

A purely ornamental version is grown in Japan called Hana Yuzu for just its flowers rather than its fruit.

A sweet variety of Yuzu known as the Yuku only grows in Japan and became  endangered during the 1970s and 1980s Currently there is a concerted effort to revive this variety in southern Japan. There is also another variety in Japan with extremely knobbly fruit skin called Shishi Yuzu.

The fruit is seldom eatemn raw at is so sour but it plays a major part in Japanese and Korean cuisine used in all manner of ways from salad dressings to beverages.