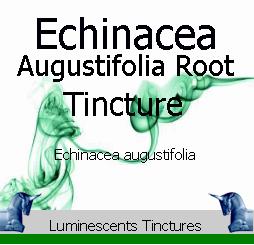 Echinacea Augustifolia Root Tincture commonly called Narrow Leaf Coneflower, is from a genus of nine species of herbaceous plants in the Family Asteraceae. All are strictly native to eastern and central North America but have now been naturalised all over the temperate world. The plants have large showy heads of composite flowers, blooming from early to late summer. It is also known as Red sunflower, Hedgehog, Indian head, Comb flower, Scurvy root

Echinacea Augustifolia Root Tinctures is popularly believed to stimulate the body’s immune system and ward off infections, particularly the common cold. There is, however, no evidence to suggest this at all and it is more a case of folklore rules or the triumph of hope over expectation that has fostered this belief.