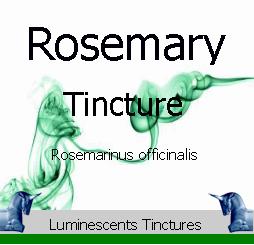 Rosemary (Rosmarinus officinalis) from the leaves of which Rosemary Tincture is derived is a woody, perennial herb with fragrant evergreen needle-like leaves. It is native to the Mediterranean region. It is a member of the mint family Lamiaceae, which also includes many other herbs. Forms range from upright to trailing; the upright forms can reach 1.5 m tall, rarely 2 m. The leaves are evergreen, 2-4 cm long and 2-5 mm broad, green above, and white below with dense short woolly hairs. The flowers are variable in colour, being white, pink, purple, or blue.

Rosemary essential oil is a powerful convulsant; if applied to the skin, it may cause seizures in otherwise healthy adults or children.

Externally it can be used in hair lotions; a few drops of Rosemary oil massaged into the scalp, then rinsed with an infusion of nettles can revitalise the hair. Used in this manner it supposed to prevent premature baldness. Rosemary is also reported to stop dandruff.

For a tonic against headaches put some sprigs into a teapot, add hot water, strain, and serve.